September was a busy month for data infrastructure topics as well as Microsoft in terms of new and enhanced technologies. Wrapping up September was Microsoft Ignite where Azure, Azure Stack, Windows, O365, AI, IoT, development tools announcements occurred, along with others from earlier in the month. As part of the September announcements, Microsoft released a new version of Windows server (e.g. 1709) that has a focus for enhanced container support. Note that if you have deployed Storage Spaces Direct (S2D) and are looking to upgrade to 1709, do your homework as there are some caveats that will cause you to wait for the next release. Note that there had been new storage related enhancements slated for the September update, however those were announced at Ignite to being pushed to the next semi-annual release. Learn more here and also here.

Note that the new native NFS is in addition to the earlier native Azure Files accessed via HTTP REST and SMB3 enabling sharing of files inside Azure public cloud, as well as accessible externally from Windows based and Linux platforms including on premises. Learn more about Azure Storage and Azure Files here.

Azure File Sync (AFS) has now entered public preview. While users of Windows-based systems have been able to access and share Azure Files in the past, AFS is something different. I have used AFS for some time now during several private preview iterations having seen how it has evolved, along with how Microsoft listens incorporating feedback into the solution.

Lets take a look at what is AFS, what it does, how it works, where and when to use it among other considerations. With AFS, different and independent systems can now synchronize file shares through Azure. Currently in the AFS preview Windows Server 2012 and 2016 are supported including bare metal, virtual, and cloud based. For example I have had bare metal, virtual (VMware), cloud (Azure and AWS) as part of participating in a file sync activities using AFS.

Not to be confused with some other storage related AFS including Andrew File System among others, the new Microsoft Azure File Sync service enables files to be synchronized across different servers via Azure. This is different then the previous available Azure File Share service that enables files stored in Azure cloud storage to be accessed via Windows and Linux systems within Azure, as well as natively by Windows platforms outside of Azure. Likewise this is different from the recently announced Microsoft Azure native NFS file sharing serving service in partnership with NetApp (e.g. powered by OnTAP cloud).

AFS can be used to synchronize across different on premise as well as cloud servers that can also function as cache. What this means is that for Windows work folders served via different on premise servers, those files can be synchronized across Azure to other locations. Besides providing a cache, cloud tiering and enterprise file sync share (EFSS) capabilities, AFS also has robust optimization for data movement to and from the cloud and across sites, along with management tools. Management tools including diagnostics, performance and activity monitoring among others.

Check out the AFS preview including planning for an Azure File Sync (preview) deployment (Docs Microsoft), and for those who have Yammer accounts, here is the AFS preview group link. 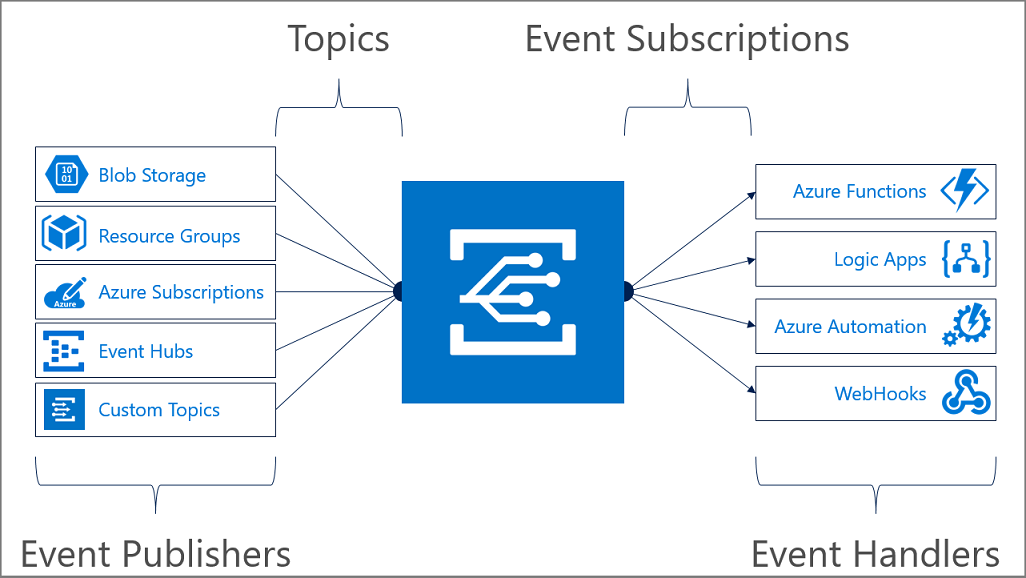 Two other Azure storage features that are in public preview include blob tiering (for cold archiving) and event triggers for events. As their names imply, blob tiering enables automatic migration from active to cold inactive storage of dormant date. Event triggers are policies rules (code) that get executed when a blob is stored to do various functions or tasks. Here is an overview of blob events and a quick start from Microsoft here.

Keep in mind that not all blob and object storage are the same, a good example is Microsoft Azure that has page, block and append blobs. Append blobs are similar to what you might be familiar with other services objects. Here is a Microsoft overview of various Azure blobs including what to use when.

Microsoft has evolved from command prompt (e.g. early MSDOS) to GUI with Windows to command line extending into PowerShell that left some thinking there is no longer need for GUI. Even though Microsoft has extended its CLI with PowerShell spanning WIndows platforms and Azure, along with adding Linux command shell, there are those who still want or need a GUI. Project Honolulu is the effort to bring GUI based management back to Windows in a simplified way for what had been headless, and desktop less deployments (e.g. Nano, Server Core). Microsoft had Server Management Tools (SMT) accessible via the Azure Portal which has been discontinued.

This is where project Honolulu comes into play for managing Windows Server platforms. What this means is that for those who dont want to rely on or have a PowerShell dependency have an alternative option. Learn more about Project Honolulu here and here, including download the public preview here.

What this means is that you can get into the converged, hyper-converged software defined storage game with Windows-based servers supporting Hyper-V virtual machines (Windows and Linux) including hardware for around $10,000 USD (varies by configuration and other options).

Speaking of Microsoft Azure public cloud, ever wonder what the network that enables the service looks like and some of the software defined networking (SDN) along with network virtualization function (NFV) objectives are, have a look at this piece from over at Data Center Knowledge.

In related Windows, Azure and other focus areas, Microsoft, Facebook and Telxius have completed the installation of a high-capacity subsea cable (network) to cross the atlantic ocean. Whats so interesting from a data infrastructure, cloud or legacy server storage I/O and data center focus perspective? The new network was built by the combined companies vs. in the past by a Telco provider consortium with the subsequent bandwidth sold or leased to others.

This new network is also 4,000 miles long including in depths of 11,000 feet, supports with current optics 160 terabits (e.g. 20 TeraBytes) per second capable of supporting 71 million HD videos streamed simultaneous. To put things into perspective, some residential Fiber Optic services can operate best case up to 1 gigabit per second (line speed) and in an asymmetrical fashion (faster download than uploads). Granted there are some 10 Gbit based services out there more common with commercial than residential. Simply put, there is a large amount of bandwidth increased across the atlantic for Microsoft and Facebook to support growing demands.

Where To Learn More

What This All Means

Microsoft announced a new release of Windows Server at Ignite as part of its new semi-annual release cycle. This latest version of Windows server is optimized for containers. In addition to Windows server enhancements, Microsoft continues to extend Azure and related technologies for public, private and hybrid cloud as well as software defined data infrastructures.

By the way, if you have not heard, its Blogtober, check out some of the other blogs and posts occurring during October here.