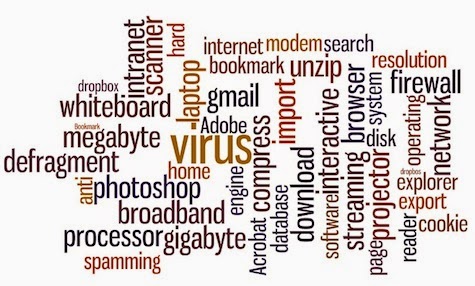 Words like data centers, cloud, computer, smartphones, and laptops were at some stage unknown to many, but now these have become standard. In the current scenario, many new tech words have come in that are funny, thoughtful and bizarre.

Take for examples words like hot spot, cookies, Bluetooth, spam, virus, etc. How virus became a part of technical world? It is a term used to describe infection caused to human body that leads to sickness. But eventually, it was associated with technology that defines virus as a piece of code that enters within a computer system to steal, corrupt or damage data. Several such odd words exist within the technical domain. Besides, more words are buzzing and this piece will put down some latest words that entered the tech dictionary.

Gigaflop is per unit computing speed that is equivalent to one billion floating-point operations per second. It is used to determine processor speed and in what approach computers can manage exhaustive data operations.

Brick is defined as breaking a device until it stops functioning completely, especially smartphone. To keep it simple, it is anything you do that can turn your device lifeless and nothing can bring it back to life. No wonder how hard you try to restore the device, it can’t be repaired. Thus, the effect is as strong as using a house brick and that’s how it got the name.

Disruptive technology has nothing to do with causing trouble. It is referred to the technology that transforms the conventional approaches of performing tasks or changes the features of products and services, with an objective to bring improvements in the marketplace. Few examples are cloud solutions, big data, mobile devices, social networking, etc.

Sounds like it deals with something creepy. As though some data that lies hidden far from anyone’s reach in the chamber. But it is nothing like that. Consulting and market research company Gartner Inc. describes dark data as "information assets that organizations collect, process and store in the course of their regular business activity, but generally fail to use for other purposes." Any data within organization that is not analyzed, used, or processed is dark data. It mainly occurs because it is difficult to scrutinize. But it eats up too much space and thus, needs clean up.

Any information on the web that inaccessible and intentionally or unintentionally hidden from the search engine bots. Data is usually kept hidden from the online world to protect it from invaders. On the other hand, dark web lies inside the deep web, which is smaller than deep web but potentially dangerous. Dark web is where illegal business is executed and is a place for criminal activists.

Yottabyte is a quadrillion gigabyte and comes after Zettabyte.  For better understanding, Yottabyte is followed by Zettabyte, Exabyte, Petabyte and Terabyte. The fact is no system has yet even reached one Yottabyte. Besides, even all the hard drives combined in the world don’t make the gigantic amount. Based on researches, the entire world’s computer systems contained nearly 160 Exabyte, which is 1 billion GB. Presently, only the social media giants Facebook, Twitter and Google, deals with Yottabyte.